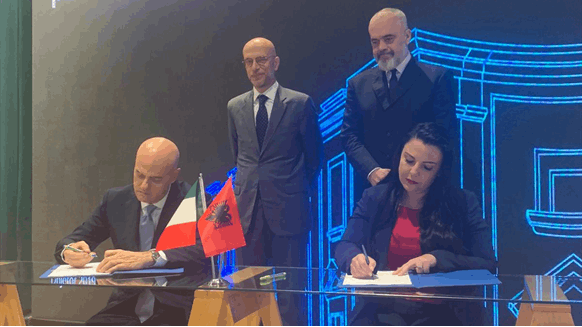 Eni S.p.A. reported Friday that it has signed a production sharing contract to explore the onshore Dumre Block in Albania, marking the company’s return to the country on Europe’s Balkan Peninsula after a two-decade absence.

The contract, which Eni signed with Albania’s Ministry of Infrastructure and Energy, grants Eni a 100-percent equity interest in Dumre and follows a competitive bidding round the country’s National Agency for Natural Resources (AKBN) launched in September of this year, Eni revealed in a written statement emailed to Rigzone. The company contends the 227-square-mile (587-square-kilometer) block, located approximately 25 miles (40 kilometers) south of Albania’s capital Tirana, sits in a “‘proven’ hydrocarbon area with good oil prospectivity.”

The new subsidiary Eni Albania will operate Dumre and has committed to drill an exploratory well in the license, Eni noted. During the early 1990s, Eni won the Adriatiku-2 and Adriatiku-4 offshore exploration blocks. In 1999, it left Albania after drilling three non-commercial wells. The firm stated Friday that it expects the country to become a vital energy crossroads for Europe and the Balkans.

“The new entry after 20 years in Albania, in the Dumre Block, represents a very important step for Eni, which is committed with its competencies, know-how and sustainability drivers to help developing a key country of the Balkan region and Italy’s strategic partner,” concluded Eni CEO Claudio Descalzi.