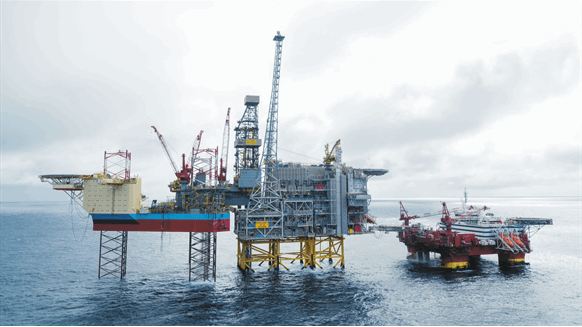 Software and engineering major Emerson has put pen to paper on a five-year framework agreement with Equinor under which it will provide operational support to the latter’s Martin Linge platform in the Norwegian North Sea.

The service agreement, which includes options for three additional five-year periods, covers maintenance and upgrades of the control technology, software and instrumentation. These technologies are helping to accelerate carbon-efficient production and empower remote operation from onshore for increased worker safety and reduced operating costs.

Martin Linge is a significant development for Norwegian oil and gas production, with expected recoverable resources of around 260 million barrels of oil equivalent. Emerson’s technology, project expertise and global resources were crucial in helping achieve first oil safely, and with the award of this service contract, Equinor gains continued support to optimize production, reduce energy consumption and emissions, and maximize the potential of the Martin Linge development.

Martin Linge, situated 26 miles west of Oseberg, was the first platform on the Norwegian continental shelf to be started up from shore. The 63 billion Norwegian krone ($7.3 billion) mega-project includes a production platform and a permanently anchored floating storage and offloading (FSO) vessel. These facilities are powered from onshore via the world’s longest alternating-current sea cable, helping to reduce CO2 emissions by 200,000 tonnes per year. Oil is processed on the FSO vessel before being transported in shuttle tankers to the global market, while gas is transported via pipeline to St. Fergus, Scotland.

The award of the service agreement follows Emerson’s implementation of a complete automation solution for the project, which incorporates the company’s DeltaV distributed control system; advanced wired and wireless measurement instrumentation; critical control, emergency shutdown and isolation valves; metering technology and asset management software. This technology enables both the platform and the FSO vessel to be mainly operated from an onshore control room in Stavanger, with offshore operators able to access the control system interface via mobile handheld devices, resulting in increased worker flexibility and efficiency. Controlling the production facilities in this manner enables three shifts of operators to work from onshore rather than offshore, reducing risk to personnel and minimizing costs.

Emerson’s cloud engineering services and digital twin technology, played a crucial role in the successful delivery of the project and first oil being safely achieved. The company’s Remote Virtual Office (RVO) platform enabled project personnel around the world to collaborate securely in a virtual engineering, commissioning and testing environment, regardless of their location. This not only reduced travel requirements – which was vital due to COVID-19 restrictions – but also had a significant impact on project schedule, risk and costs. Emerson’s digital twin technology also enabled significant project and operational benefits such as streamlining commissioning of the control system, helping Equinor train its operators to experience real-life scenarios before the control system went live, and make continued improvements that help to optimize production, and reduce energy consumption and emissions.