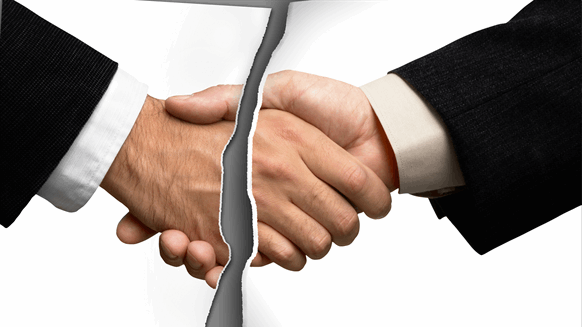 Earthstone Energy and Sabalo Energy have terminated their deal based on poor market conditions.

Earthstone Energy, Inc. is terminating its acquisition of Sabalo Energy, LLC due to market conditions, the company announced Dec. 21.

In October, U.S. independent Earthstone Energy entered into two agreements with Sabalo worth $950 million cash and stock that would have significantly expanded Earthstone’s footprint in the Midland Basin.

But citing a decline in commodity prices and market conditions, the companies have entered into an agreement to terminate the pending acquisition.

The special meeting of Earthstone stockholders scheduled for Jan. 3, 2019 to approve the acquisition has also been canceled. Earthstone will reimburse Sabalo for transaction-related expenses up to $3.1 million as part of the mutual termination agreement.

“Despite the high quality of the Sabalo assets and the outstanding opportunity the transaction provided Earthstone, the drastic change in commodity prices and in the debt and equity markets has negatively affected the significant merits of the acquisition,” Earthstone CEO Frank Lodzinski said in a company statement. “Accordingly, we have mutually agreed to terminate the Contribution Agreement. While we are disappointed with this result, we greatly appreciate the hard work of the Sabalo management team, our officers and employees and our financial partners, as we all worked tirelessly to close this deal.”