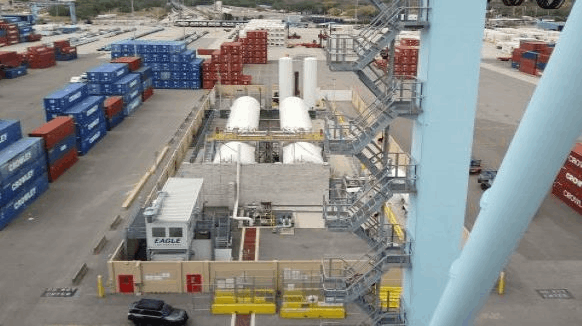 Mid-scale shipments to the Caribbean will grow from bunkering and ISO tanks.

Earlier this year Eagle LNG Partners named Matrix Service as the engineering, procurement, and construction contractor to build an LNG export terminal in Jacksonville, Florida. Eagle, which is a privately held company of the private-equity firm Energy & Minerals Group, already has two small-scale LNG facilities in the area.

The proposed export facility will produce 1.65 million gallons per day of LNG and have a storage capacity of 12 million gallons or 45,000 cubic meters. Plans include a truck-loading system and a dock capable of loading vessels with capacity of 2,000 to 45,000 cubic meters. It has been designed specifically to supply LNG in the Caribbean and Central American markets for marine fuel and power generation.

The export terminal is to be built on property in an industrial area on the St. Johns River. It will use liquefaction equipment and technology from Chart Industries with a modular design. That will allow for lower initial capital costs and production at current demand with incremental additions easily bolted on. The final investment decision will be made later this year.

Eagle’s two existing facilities are a liquefaction train and storage tank at Maxville, 26 miles inland from Jacksonville; and the quayside Talleyrand bunker station at the intermodal terminal in the Port of Jacksonville owned by Crowley Maritime. The steamship line was involved in designing the bunker facility to fuel two of its vessels. They are Jones-Act ships, trading between the U.S. mainland and Puerto Rico. Liquefaction at Maxville started in 2017; bunkering at Talleyrand started the next year.

“Having a combination of both small- and mid-scale infrastructure in Jacksonville, Eagle LNG Partners is ideally located to provide the lowest-cost LNG for Caribbean and Latin America exports and marine bunkering, and to spur domestic uses of LNG to displace petroleum products,” said Sean Lalani, president.

Maxville has liquefaction capacity of 200,000 gallons per day (1,000 cubic meters), a 1-million-gallon storage tank, and a truck-loading system for tank trailers and ISO containers. Twin ready-storage tanks at Talleyrand hold 265,000 gal each. They are filled by shuttle trucks from Maxville. It takes 30-35 truckloads to refill the station between ship loadings.

Maxville was built to provide fuel for Crowley and for ISO containers to be shipped to Puerto Rico and other Caribbean countries. The arrangement between Eagle and Crowley allows for third-party bunkering, but there is no such activity yet. Among Maxville, Talleyrand, and the planned export facility, Eagle LNG will have regional supply redundancy and 13.5 million gallons of storage. The arrangement between Eagle and Crowley allows for third-party bunkering, but there is no such activity yet.

“The entire ship bunkering process takes about eight hours,” said Ted Mooningham, key account manager at Eagle. “Of that four are actual fuelling.” That is relatively simple compared to the bookkeeping side of the operation: “We measure the LNG in cubic meters, from an order in metric tons, it is delivered in gallons, and billed in Btu,” he said wryly.

Matrix built the Maxville facility’s storage tank. Chart Industries supplied the cryogenic tanks at Talleyrand and was involved in the design and engineering. There is a duplicate control room inland at Maxville to the one quayside at Talleyrand. As the first of its kind Talleyrand had to be custom built, but Mooningham said it could be replicated elsewhere.

With the abundance of existing pipelines that come into Jacksonville, Eagle buys gas from interstate pipelines, and sells LNG under terms negotiated with individual customers. Sales can be either fob/plant gate or delivered pricing. Eagle also participates in downstream investment in end markets.

Eagle sees the most immediate growth in “ship bunkering, short-sea shipments of LNG by ISO containers and for the near to long-term in bulk LNG of overseas’ shipments for power generation,” the company stated. “We are also active in domestic markets and see great potential in the future given the environmental and economic drivers for greater natural-gas use.”

The Energy Information Administration expects U.S. net natural gas exports to almost double by 2021, according to a January 23 assessment. Eagle believes the growth potential is such that additional production is needed to simply keep up with demand in emerging export markets.

“Our business model encourages partnerships and allows us to keep infrastructure costs low while keeping our response times to a minimum,” Lalani said. “Over the past five years, we have held discussions with decision makers in the regions we serve. Further, Eagle LNG Partners is committed to providing LNG in regions where typically the customer or countries only choices have been heavy fuel oil or diesel.”