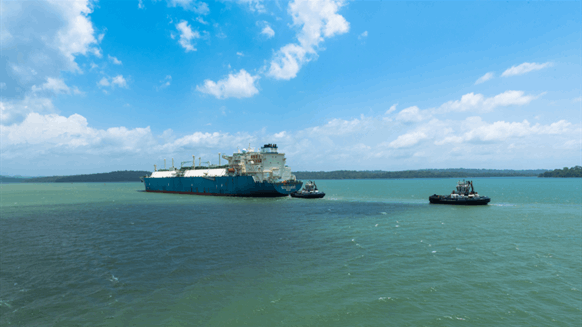 Boasting a nameplate capacity of 3.5 million tonnes per annum (mtpa), the FLNG vessel design reached the milestone via Delfin’s cooperation with Samsung Heavy Industries and Black & Veatch, Delfin noted in a written statement.

The Delfin LNG Project comprises a deepwater port in the Gulf of Mexico that would require minimal additional infrastructure investment to support up to four FLNG vessels producing up to 13 mtpa of LNG, according to Delfin Midstream. According to a project description on the company’s website, FLNG vessels would receive gas off the coast of southwestern Louisiana via the UTOS and HIOS pipelines. The firm noted the project has received a positive record of decision from the U.S. Maritime Administration (MARAD) and U.S. Department of Energy approval for long-term LNG exports to countries lacking a free trade agreement with the United States.

Delfin Midstream stated that each FLNG vessel can be developed independently with its own commercial and financial structure, enabling the project to fall within the “lower end of the global LNG cost curve.” In addition, the company contends it offers “the absolute lowest” threshold for a final investment decision (FID): 2 to 2.5 mtpa firm offtake. Also, Delfin noted that two offloading facilities on each FLNG vessel will facilitate service to both large, ocean-going carriers and regional demand for LNG bunkering and small-scale carriers.

“The successful completion of our FEED confirms our ability to offer industry-leading pricing of 115 percent of Henry Hub plus $2.00 for 20-year transactions,” commented Delfin CEO Dudley Poston. “The flexibility of a low-cost, floating asset also allows Delfin to offer shorter-term 10-year deals for 115 percent of Henry Hub plus $2.40 or flexible tolling structures. Delfin continues to advance commercial discussions with multiple buyers and end-users and the completion of our FEED is a major milestone towards the FID of the first Delfin FLNG vessel.”

Delfin stated that it – along with Black & Veatch and Samsung Heavy – has developed a term sheet for a lump-sum turnkey engineering, procurement, construction, integration and commissioning contract as the basis for developing a fully termed agreement.

“Recent hurricane activities in the Gulf of Mexico have highlighted the importance of sound design and operational measures to minimize potential downtime of LNG export facilities,” remarked Wouter Pastoor, Delfin’s chief operating officer. “The Delfin project is uniquely different since the FLNG vessels are self-propelled and use a disconnectable, mooring solution to allow the FLNG vessel to sail away if a severe hurricane passes over the site. The same technology and operating procedures have been used for decades on oil FPSOs in tropical storm locations. The recent experiences with Hurricane Laura demonstrated the superior operations of offshore disconnectable oil FPSOs in the Gulf of Mexico.”