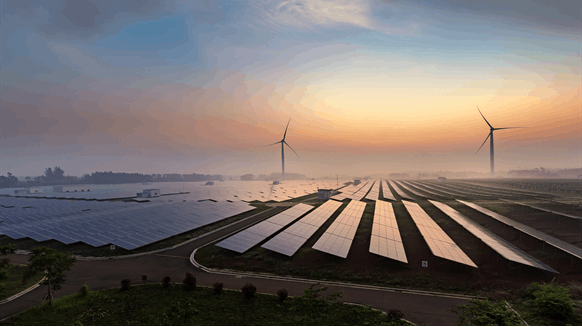 China’s power sector, which contributes more than 40% to the country's greenhouse emissions, will play a critical role in reducing emissions by decarbonizing itself and other sectors.

China is the largest consumer of electricity in the world and the largest emitter of CO2. It is also developing more renewable energy capacity than any other country and has a target of reaching carbon neutrality by 2060. During COP27 in Egypt, China pledged to reach peak emissions by 2030 and is still willing to discuss the global goal of limiting global warming to 1.5 degrees Celsius above pre-industrial levels.

Rystad Energy forecasts that China’s renewable energy growth will continue a steep upward trajectory that could see it reach close to 6,000 GW of installed solar PV and wind capacity by 2050.

China’s electricity consumption this year is expected to total 7,400 TWh. Around 58% of this power is generated from coal-fired power plants, followed by hydro with 14%, and wind with 12%. In the last 20 years, China prioritized the development of coal-fired generation capacity, which will total 1,115 GW this year. Using its large coal reserves to provide an affordable source of energy, this has powered the country’s economic growth and limited its dependence on energy imports. Since 2010, however, China has also been diversifying its power mix, installing 160 GW of hydro capacity, 46 GW of nuclear, 360 GW of solar PV, and 360 GW of wind, making it the largest developer of renewable energy capacity worldwide.

Power demand is forecast to reach 13,600 TWh by 2050, with most of the growth coming from the transport sector. In total, over 6,200 TWh of new electricity supply will be needed to meet future demand.

China currently has at least 25 GW of coal generation capacity still under development, which is due to push coal-fired capacity to a peak of 1,140 GW by 2025. However, coal generation could peak as early as 2023 as output from old coal-fired power plants is replaced by fast-growing renewable energy. Installed gas-fired generation capacity, by contrast, is forecast to continue growing from 112 GW in 2022 to 355 GW by 2050, helping replace coal plants and providing base load – and flexibility – to the system.

With the power sector being the largest source of emissions, this would put China’s power sector on track to help meet its target of peaking emissions by 2030, although emissions from other sectors would still need to be addressed.

“China is ahead of the game; coal use in the power sector is set to peak in two years’ time and new renewable power is coming online faster than any other country. Economics favoring renewables and domestic solar manufacturing capacity means that China’s power sector could rapidly decarbonize by 2050. China has all the pieces needed to scale renewables rapidly and the extent of its success will have a global impact on global greenhouse gas emissions,” said Carlos Torrez Diaz, head of power at Rystad Energy.

During COP 26, held in the UK in late 2021, China announced its target of lifting total installed solar PV and wind capacity to 1,200 GW by 2030 compared to 745 GW in 2022. Current developments suggest China will not only meet this target but could surpass it and increase total installed capacity to around 2,000 GW. This would cement the country’s leadership in renewable energy capacity.

The 6,000 GW of renewable capacity set to be installed by 2050, plus the 540 GW of hydro, and 296 GW of nuclear power, would be enough to generate 91% of the country’s electricity from fossil fuel-free sources this year. The levelized cost of energy (LCOE) of solar PV in China is currently estimated at around $50 per MWh compared to more than $80 per MWh for a new coal plant, and $55 per MWh for existing plants.

Current project developments, manufacturing capacity and policies are guiding China in the right direction of lower emissions. For it to help limit global warming to 1.5°C, an even faster decline in fossil-fueled power generation will be needed in China. Rystad Energy’s current pathway scenario expects that there would be around 1,000 megatons of emissions from the power sector remaining by 2050. Even if some of these emissions could be stored using CCS, more will need to be done to help emissions drop closer to zero megatons by 2050 to help limit global warming.

Rystad Energy forecasts that global emissions will need to peak this year and drop below 9,600 megatons by 2050 for the world to remain on track to limit global warming to 1.5°C. Given that China is and will continue to be the largest emitter of CO2, the country’s actions play a central role in this. During COP27, China’s environmental envoy did not oppose mentioning 1.5°C as a goal for limiting global warming, giving some hope that developments could move faster in the right direction.

In the current pathway scenario described above, China’s power capacity developments would be enough to help limit global warming to 1.9°C. To keep on track to meet the 1.5°C scenario, more than twice as much solar PV and onshore wind capacity would be needed in China by 2050. The country would also need substantially more battery storage capacity to help back up the intermittency of renewables. In the 1.5°C scenario, a forecast 4,300 GW of battery storage capacity would be needed by 2050 compared to 1,084 GW in the current pathway scenario.

The 1.5°C goal is very ambitious but could still be feasible. China is the world’s largest manufacturer of solar PV panels with current manufacturing capacity of 425 GWAC per year, which is expected to reach 613 GWAC per year by 2030. The existing capacity is already enough to achieve the country's needed average annual installation rate of 350 GWAC of solar PV to stay within 1.5°C global warming but this would imply reducing panel exports.