Crude Oil Down for the Week but Gas Rebounds 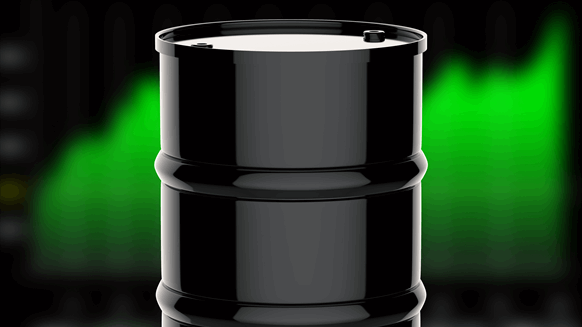 December West Texas Intermediate (WTI) crude oil futures remained flat Friday, settling at $56.46 a barrel (bbl) for the second consecutive day. Compared to the Nov. 9 close, the WTI is  down 6.2 percent for the week.

The January Brent contract price showed some momentum Friday, gaining 14 cents to settle at $66.76. Despite the increase, the overall week-on-week direction for the Brent has been downward. The benchmark is down 4.9 percent overall since Nov. 9.

“WTI and Brent continued into their sixth straight week of declines, losing over $20 per bbl in value over the period and another five percent this week alone,” said Tom Seng, Assistant Professor for Energy Business with the University of Tulsa’s Collins College of Business. “WTI hit a two-year low but managed to post some small gains late week while Brent pricing was the lowest since March.”

Bearish factors such as slowing global demand, rising inventories and the U.S. government’s waivers from economic sanctions on Iran to several oil-importing countries caused “the bottom to fall out” for the WTI and Brent this past Tuesday, continued Seng. Also, a fluctuating U.S. stock market and a relatively strong U.S. dollar earlier in the week placed downward pressure on oil prices, he said.

“It seemed the ‘longs’ had to ‘throw in the towel’ with the breach of the critical $60 support level for WTI,” Seng said. “This came despite the weekend meeting of OPEC where cartel members agreed that some production cuts would be needed after the first of the year to stem the tide of lower prices.”

“Inventory at the key Cushing Hub storage increased last week by 2.2 million bbl, which is still less than 50 percent of that facility’s capacity,” Seng said.

The price of a gallon of reformulated gasoline (RBOB) for December delivery picked up 2 cents Friday to settle at $1.577. December RBOB is down approximately 3 percent for the week.

“RBOB continues to follow crude oil, falling on Tuesday and rebounding late,” said Seng. “Current price levels have not been this low since July 2017.”

December Henry Hub natural gas futures gained 23 cents Friday to settle at $4.27. The benchmark is up nearly 15 percent for the week.

“The energy story of the week had to be natural gas, which skyrocketed toward $5.00 on Wednesday after breaching the critical $4.00 resistance level Tuesday,” Seng noted. “Traders had to weigh the impact of the cold front that moved across the country versus the total inventory of natural gas in storage, which has been at a deficit to the year-ago and five-year averages for months now.”

Although prices settled “substantially lower” on Thursday, they remained above $4.00 into Friday, Seng continued.

Seng also pointed out that gas production and consumption figures have been mixed lately.

“Production last week decreased to 87 Bcf per day (Bcfd) while consumption jumped to 103.5 Bcfd, with the increases coming mostly in the residential/commercial sector,” Seng said. “Exports to Mexico dropped to 4.6 Bcfd while LNG exports increased to 4.3 Bcfd. Pipeline fuel usage and losses also increased by 1.2 Bcf due to the higher throughput numbers.”