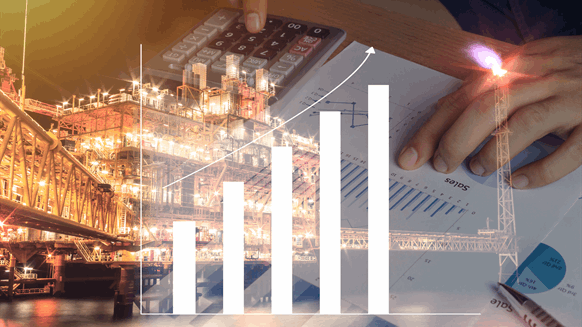 Even with funding based on a thorough engineering definition, operators could still see a cumulative $111-billion cost overrun.

The prospect of oil prices remaining at about $60 a barrel, combined with impressive cuts in development and operational costs since 2014, have encouraged E&P companies to accelerate development of their offshore projects including Mad Dog Phase 2 in the Gulf of Mexico, the Azeri–Chirag–Gunashli in the Caspian Sea and the Tortue and Bonga Southwest field off the coast of West Africa.

Indeed, Rystad Energy expects sanctioning of offshore field projects to rise to around $100 billion a year over the next four years, or double the annual average of 2015-18. But, rushing the final investment decision, especially for tailor-made designs, can increase uncertainty over the final cost by as much as 20 percent either way. Consequently, “for offshore operators, that means the expected variation for projects to be sanctioned during the period from 2019 to 2023 could be as high as $220 billion” according to a June 2019 study by Rystad Energy.

The need for good planning

Quite naturally, the success rate of sanctioned projects around the world varies widely. As Rystad Energy demonstrates, even taking into account funding based on a thorough engineering definition, operators could still see a cumulative $111 billion cost overrun. Indeed, Rystad has found cases in which accelerating a sanctioning decision without proper engineering definition can often result in actual costs exceeding target costs by up to 50 percent.

The $60 a barrel challenge

Matthew Fitzsimmons, VP, Cost Analysis at Rystad Energy, notes that “even if oil prices stay above $60 per barrel over the next five years, final investment decisions could take longer to reach” to allow for sufficient time to mature the engineering definition and “ this will lower the uncertainty that their funding estimates will carry.” He warns that “failure to do so will not only have an adverse impact on the operator’s ability to control cost overruns but also the minority share owners of the field.”

Recent well-publicized cost overruns are a wake-up call and signal the vital importance of proper project planning and implementation. For example, the cost estimate for Shell’s huge Prelude FLNG project was $11 billion back in 2011. Nonetheless, due to the unforeseen mega engineering and fabrication challenges posed by this pioneering venture, development costs ballooned to around $15 billion – an increase of more than 36 percent. The scale of this cost overrun caused the major to cancel its order for another three FLNG units worth around $4.6 billion from Samsung Heavy Industries.

Since the oil price debacle of summer 2014, oil producers have become even more cost conscious and have imposed strict controls over their capital expenditures. This has been achieved largely in-house, with many operators opting for fewer, but better drilled wells, alongside more phases per development, whilst employing the latest technology, modularization and standardization of equipment and parts. The drive to reduce costs has inevitably had a knock-on effect on the profitability of major oilfield service companies including Schlumberger, Halliburton, Transocean and Norway’s Aker solutions, which competed for work in the downturn and temporarily reduced their fees. Indeed, the major oil companies have been remarkably successful in driving the average pre-final investment decision break-even point down to US$49 per barrel of oil equivalent compared with a pre-crisis $78 in 2014, according to a Wood Mackenzie report released November 2018.

While break-even costs of deep-water projects have fallen and industry profits and confidence are up, the supply chain and oilfield service companies will once again try to raise fees as demand for their services rises with increased activity. Simultaneously, industry insiders doubt whether the oil majors have fully factored in Rystad Energy’s findings on likely cost inflation in forthcoming projects.

Mahinder Nayar  |  July 08, 2019
Not unusual. Lack of clear definition/concept, unrealistic schedule and very democratically run project will always have this over run. Cost control is not to be done thru procedures rather than Management needs to walk with project. Bigger team than required do contribute to over runs and this is not understood by most project managers.
Daniel Dominick  |  July 02, 2019
Not surprised, Feed OCS revising hrs and workscopes, knocked down on bringing up workfronts not picked up in jobscards and other workpack costing anomalies. t'was a 10yr ago, would imagine not changed
Russell Hopley  |  July 01, 2019
I'is like - "here we go again". Oil Industry management must clearly define the cost and schedule of large new facility projects both the complexity and scope of large, new fast track projects and provide allowances for cost and schedule overruns to avoid completion delay and a huge cost overrun.
Tony Lowery  |  July 01, 2019
Here we go again, another project(s) go way over budget.
RELATED COMPANIES
Company: Halliburton Company more info
Company: Shell more info
Company: Schlumberger more info
Company: Transocean Ltd. more info
Company: Aker Solutions more info