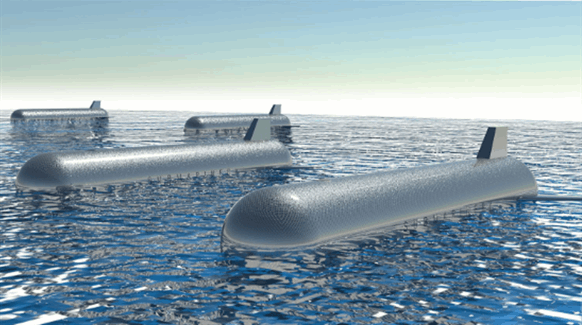 The firm contends it can build a CFSU, a group of which appears in the above rendering, in a matter of weeks. IMAGE SOURCE: Business Wire

China-based Haiyan Submarinenergy Ltd., which describes itself as a “composite material shipbuilding company,” reported Thursday that in May it will deliver its first batch of offshore tanks for storing crude oil.

According to a written statement from the firm, each 5,000-ton crude floating storage unit (CFSU) can hold 35,000 barrels of oil (one metric ton of crude oil equals approximately 7.3 barrels). The non-metal material comprising the tanks reportedly lasts more than 50 years in crude and seawater environments. The company also contends a CFSU can be built “in a few weeks,” compared to three years’ construction time for a very large crude carrier (VLCC).

“As the world runs out of oil storage tanks, it’s become difficult for many oil traders to take advantage of the current negative price of oil and a better storage option,” stated Submarinergy.

The company, which notes that it was formed by material scientists who “invented composite materials that are 25 times stronger than the same weight of steel,” added that it sells the CFSU vessels and offers five-year lease-purchase contracts. A diagram supplied by Submarinergy outlines the components of a CFSU.

Submarinergy revealed that it is also holding discussions with the classification societies DNV GL and CCS (China Classification Society) “to ensure smooth and safe ocean navigation.”