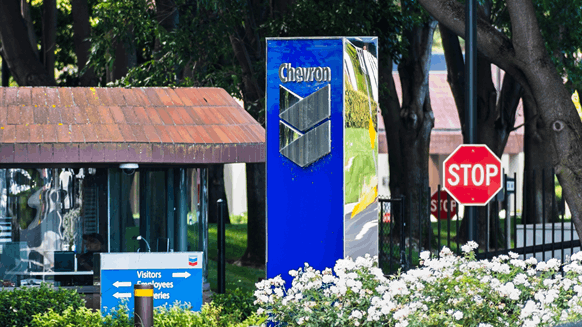 Chevron Corp. reported Monday that it has struck a definitive agreement to acquire all outstanding shares of Noble Energy, Inc.

Chevron Corp. reported Monday that it has struck a definitive agreement to acquire all outstanding shares of Noble Energy, Inc. in an all-stock transaction valued at $5 billion, or $10.38 per share.

Assuming Chevron’s July 17, 2020, closing price and the terms of the agreement, Noble shareholders will receive 0.1191 shares of Chevron for each Noble share, Chevron noted in a written statement emailed to Rigzone. The company added the transaction’s total enterprise value, including debt, is $13 billion.

“Our strong balance sheet and financial discipline gives us the flexibility to be a buyer of quality assets during these challenging times,” remarked Michael Wirth, Chevron’s chairman and CEO.

According to Chevron, the acquisition will add approximately 18 percent to its year-end 2019 proved oil and gas reserves at an average acquisition cost of less than $5 per barrel of oil equivalent (boe) and nearly 7 billion barrels of risked resources for less than $1.50 per boe. The figures are based on Noble’s proved reserves at the end of 2019, Chevron added.

Chevron stated the deal boosts its U.S. onshore portfolio with assets in the DJ and Permian basins. The company pointed out the 92,000 acres in the Permian are “largely contiguous and adjacent” to its existing assets. Moreover, it noted the agreement includes an integrated midstream business and established position in the Eagle Ford. Outside the U.S., Chevron will gain a large-scale, producing presence in the Eastern Mediterranean in Israel as well as West Africa assets in Equatorial Guinea.

“This is a cost-effective opportunity for Chevron to acquire additional proved reserves and resources,” continued Wirth. “Noble Energy’s multi-asset, high-quality portfolio will enhance geographic diversity, increase capital flexibility and improve our ability to generate strong cash flow. These assets play to Chevron’s operational strengths, and the transaction underscores our commitment to capital discipline. We look forward to welcoming the Noble Energy team and shareholders to bring together the best of our organizations.”

According to Chevron, its board as well as Noble’s have unanimously approved the transaction. The deal, subject to approval by Noble shareholders, is slated to close in the fourth quarter of this year. Afterward, Noble shareholders will own approximately three percent of the combined company, Chevron added.

“Over the last few years, we have made significant progress executing our strategic objectives, including driving capital efficiency gains onshore, advancing our onshore conventional gas developments and significantly reducing our cost structure,” commented David Stover, Noble’s chairman and CEO. “As we looked to build on this positive momentum, the Noble Energy Board of Directors and management team conducted a thorough process and concluded that this transaction is the best way to maximize value for all Noble Energy shareholders. We look forward to bringing together our highly complementary cultures and teams to realize the long-term value and benefits that this combination will deliver.”

“Noble’s Permian assets are located within the Delaware subbasin in Reeves County,” Dittmar stated. “While Noble doesn’t quite bring the Permian scale of an Anadarko to the table, it’s 92,000 acres are a significant position in an active area of development and contiguous with existing Chevron leasehold. Getting as tight a fit as possible between positions is key for the development synergies investors are looking for and these positions should check that box.”

Internationally, the “best fit and biggest draw” in the agreement may be Noble’s Eastern Mediterranean gas projects at Leviathan and Tamar, Dittmar continued.

“These are premier, long-life fields providing gas to Israel, Egypt and Jordan,” he explained. “Chevron, like its major peers, has targeted these types of international gas projects as key pieces of its portfolio likely seeing long-term secular tailwinds to support gas demand over the next few decades.”

Recalling Chevron’s decision in 2019 not to top Occidental Petroleum’s bid for Anadarko, Dittmar observed that Chevron’s outlook has been “cautious and conservative” in regard to M&A and general operations and its balance sheet. A table of global upstream deals exceeding $10 billion since 2014 provided by Enervus shows the value of the Chevron-Noble deal is sharply lower than Oxy’s $57 billion Anadarko acquisition last year.

“That has been a major boon for the company facing the severe downturn in the first half of 2020 and now allows them to capitalize on available opportunities,” Dittmar said. “Given their strength, Chevron has been near the top of just about everyone’s list of potential 2020 buyers.”

He also noted that Chevron’s cautious approach is evident via an all-equity offer priced at a moderate premium compared to what often appears in corporate M&A. That moderate premium and lack of cash “leaves the door cracked” for a potential competing offer for Noble, akin to the scenario Chevron faced with Anadarko, he added.

“For Noble shareholders, Chevron equity likely looks like a fine landing spot, even absent a cash sweetener, given Chevron’s operational experience for the assets, balance sheet strength and ability to fund dividends in a tough market,” said Dittmar. “Being able to use equity as currency in a corporate acquisition like this is one of the advantages held by companies like Chevron, whose stock is likely viewed as a relatively safe haven.”

In fact, Dittmar contends the Chevron-Noble deal could serve as a template for post-COVID consolidation: all-stock consideration, a moderate premium and asset fit and synergies easily presented to investors.

“This could certainly ignite a wave of additional consolidation, although that is by no means certain as we saw with not many major deals after the Anadarko takeover,” Dittmar concluded. “While potential targets may be more plentiful, there aren’t that many companies with Chevron’s balance sheet strength and investor support to make up a buyer base.”