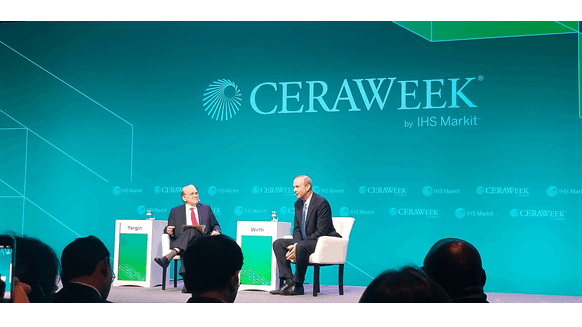 Chevron's Mike Wirth speaks about the surge in Permian production and why the company hasn't forgotten about its other resources.

Chevron’s production plan for the Permian – 900,000 barrels of oil per day by year-end 2023 – isn’t something the company hopes to do; it simply is what it is.

“This isn’t a goal; it’s more of an outcome of the progress we’ve seen in the Permian,” Chevron CEO Mike Wirth said Tuesday morning during the CERAWeek by IHS Market conference in Houston.

Wirth also said the resource base in the Permian is much larger than what was thought in the beginning.

“The Permian can kind of take all the air in the room sometimes,” said Wirth.

But Chevron hasn’t forgotten about the Gulf of Mexico or its shale resources in Canada and the Vaca Muerta in Argentina, he added.

Wirth also spoke of cost savings, including operating and development costs, which he said can be attributed to a different approach in developing the resources and not a function of the price environment.

Wirth touched on the lack of diversity in the oil and gas industry.

“The reality in this country and many other countries is that engineering schools graduate more white men than women or people of color,” he said.

Wirth said he’s “very committed” to changing the culture of his company to an environment where all are successful.

“I’m very proud that the head of exploration for Chevron globally is a woman for the first time. Our head of drilling and completions globally for the first time ever is a woman,” he said. “We have many women in senior roles. It’s a great example for our younger generation and women coming up in the organization."