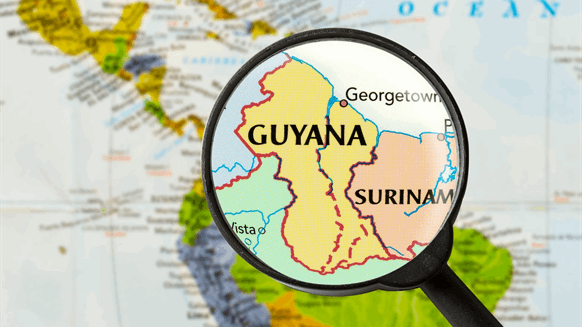 CGX Energy and Frontera Energy have completed final preparations ahead of the Wei-1 well spud, located in the Corentyne block off Guyana.

CGX Energy and Frontera Energy have completed final preparations ahead of the Wei-1 well spud, located in the Corentyne block off Guyana.

The spudding of the Wei-1 well will follow the discovery of light oil and condensate at the Kawa-1 well earlier this year.

The Wei-1 well is approximately 8.5 miles northwest of the Kawa-1 exploration well, some 125 miles offshore from Georgetown, Guyana, and will be drilled in water depth of approximately 1,912 feet to an anticipated total depth of 20,500 feet.

The Wei-1 well will target Maastrichtian, Campanian, and Santonian aged stacked channels in a western channel complex in the northern section of the Corentyne block.

As part of its preparations, the two joint venture partners has agreed with the Government of Guyana that the Wei-1 well will be spudded no later than January 31, 2023, by NobleCorp's Discoverer semi-submersible drilling rig, following the rig’s obligations in Trinidad.

“Given the delays in arrival of the NobleCorp Discover to the Wei-1 drilling location, the Joint Venture has, with support from the Government of Guyana, revised its anticipated spud window for the Wei-1 well to January 2023. The Joint Venture looks forward to building on the light oil and condensate discovery at Kawa-1 with the spudding of the Wei-1 well in the northern section of the Corentyne Block, offshore Guyana,” Suresh Narine, Executive Co-Chairman of CGX's Board of Directors, said.

Under the terms of the license for the Corentyne block, the joint venture was previously required to spud Wei-1 by November 27, 2022.

Also, as part of a phased approach in support of the Government of Guyana's efforts to accommodate increased vessel activity in Guyana, in-river construction activity has begun at the Berbice Deepwater Port together with the necessary dredging of the river. Construction of the wharf will follow.

The cargo terminal aspects of the Berbice Deepwater Port are targeted to start in mid-2023 and operation of oil and gas support base in late-2023, subject to construction schedules and supply chains.

In collaboration with the Government of Guyana, CGX has shifted the immediate focus of the Port to service expected demand for aggregates and building materials to support the Government's infrastructure development in Berbice which must be imported into the region from elsewhere in the country and offshore.