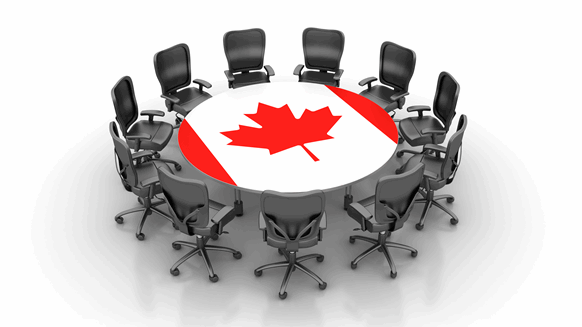 As the US oil industry reels from the oil prices collapse, Canada's oil business is seeing its oil prices rallying.

As the U.S. oil industry reels from the collapsing oil prices, Canada’s oil business is seeing its oil prices rallying. How can that be? It is the result of strong political intervention in Alberta’s oil business in an attempt to save it from devastation. When the oil price differential between Western Canadian Select and West Texas Intermediate swelled to $52 a barrel in November, the impending devastation of the Canadian oil industry demanded swift and decisive action. It was delivered, although somewhat reluctantly, and only after an earlier proposed solution failed to change the oil market sentiment. Following an OPEC-like production cut, the oil price differential has shrunk to only $16.60 a barrel, in line with what existed last spring.

How the Canadian oil industry got into this mess is a tale of energy policies going off the rails when liberal politicians placed an anti-fossil fuel governing agenda ahead of the economic interests of the country’s largest industry, and a source of substantial government revenue. The tension between Canadian liberal and conservative governing philosophies has existed for decades. It has often revolved around the development of Canada’s natural resources. The first high-profile battle between the governing philosophies occurred in the 1980s, as the world dealt with the dramatic oil price hikes engineered by OPEC in the 1970s and the loss of Iranian oil supplies from the market.

Today, the political battle is over constructing additional oil and gas pipelines for exporting more fossil fuels, which, when burned, release carbon emissions that contribute to global warming and threaten the existence of future generations. Stopping the burning of oil and natural gas, and especially the carbon-rich bitumen extracted from Canada’s oil sands, has become a paramount objective of environmentalists. Canada, with the world’s third largest oil reserves, of which 97 percent is oil sands, has become a prime target of the “keep it in the ground” movement. Their key disruption strategy is stopping the building of new pipelines.

For Canada, oil exports are critical to its economic wealth. Unfortunately, the lack of pipelines carrying hydrocarbons anywhere other than to the United States has created a unique dilemma for Canada’s oil business. America’s shale revolution success is reducing the need for more Canadian oil. This is a change in the historical relationship between the two countries. While Canada remains the number one oil supplier to the U.S., the slowing of America’s oil use and the growth of its domestic output is forcing Canadian oil producers to seek new markets.

The pipeline battles started in 2011, when TransCanada, Inc. proposed building Energy East, a one million barrel-a-day pipeline to haul Western Canadian crude oil to the heavily populated and industrialized Eastern provinces, and eventually to East Coast refineries for producing petroleum products for global markets. The pipeline would have ended Eastern Canada’s oil imports. Killing Energy East was key for the environmental movement, and they were successful.

In 2015, Canada’s Liberal Party won the federal election, elevating Justin Trudeau to the prime minister office.  His governing agenda included an energy policy based on picking a few energy projects to support in hopes of gaining energy industry support for a national carbon tax to limit emissions. This policy failed to dissuade environmentalists from protesting new pipelines. Following the victory over Energy East, environmentalists convinced the Trudeau government to reject Enbridge’s Northern Gateway project to move oil sands output to the Pacific Coast. The government did, however, back the Kinder Morgan’s Trans Mountain Pipeline to perform the same function. That decision was unpopular with the environmentalists who vowed to fight the project. After losing every legal battle, environmentalists were victorious when a court found the approval process defective and blocked the pipeline. This came on the day the federal government bought Kinder Morgan’s TMP, after the company gave up on it due to the legal harassment.

In May, Canada’s WSC sold at a $17.25 a barrel discount to WTI. By September, the differential had expanded to over $30.50, and in November it averaged $39.25. At times, the differential reached $52 a barrel, as wellhead prices fell to $11 a barrel. The Canadian Association of Petroleum Producers estimates that cost the Canadian economy $13 billion for the first 10 months of 2018. Daily cost estimates for the industry ranged upwards of $80 million a day – cash flow critical to the operation of companies and the health of the entire Canadian oil business.

The oil crisis in Alberta split the industry between the fully integrated oil companies and mere oil producers. The former enjoyed low oil costs for their refineries, while selling the output into a robust oil-price environment.  Unfortunately, Alberta lost royalty revenues and income taxes, as crude oil prices were low, and refined products were sold in the U.S., and not subject to Canadian taxes. Finding new ways to the market was producers’ first choice, which meant adding to oil-by-rail capacity, an expensive and time-consuming effort. After several oil companies announced such moves, the Alberta government announced it would buy locomotives and tank cars to boost the province’s oil export capacity. When oil prices failed to react, Alberta Premier Rachel Notley embraced an 8.7 percent mandated production cut for the province’s producers. Oil prices soared in response, even though the cuts are not effective until January 1, 2019.

(Editor's Note: Part two will detail the battle to reach the production-cut decision and its impact on Canada’s oil industry in 2019.)