The shale revolution that has transformed the U.S. oil and gas industry has completely passed California by.

Not that long ago, California was the second most vital U.S. oil producing state. Since peaking in 1985, however, output has plunged almost 60 percent to 460,000 barrels per day (bpd).  This collapse is made even more discouraging by the fact that total U.S. crude oil production has been soaring to record heights, up 140 percent to 12.1 million bpd over the past decade. Indeed, the shale revolution that has transformed the U.S. oil and gas industry has completely passed California by. Since 2008, while U.S. crude oil reserves have more than doubled to 45 billion barrels, California’s reserves have declined 25 percent to 2.2 billion barrels in the shale-era.

The most troubling part for California is that the state still uses a lot of oil. California each day devours around 40 million gallons of gasoline, uses 8 million gallons of diesel fuel, and accounts for 20 percent of all U.S. jet fuel consumption. Although the state is surely a global leader on renewables, wind and solar are strictly sources of electricity and do not really displace the need for petroleum, a designed transportation fuel. For every passenger vehicle in California today that runs on electricity there are about 70 that run on oil. Even reaching the ambitious goal of 5 million plug-ins by 2030 would mean less than 15 percent of the state’s cars running on electricity.

The inevitable result of plummeting production amid high consumption is that California is forced to import 70 percent of the oil that it needs. With the collapse of Alaska’s production, foreign sources now supply almost 60 percent of California’s crude oil, compared to just 15 percent 20 years ago. Additionally, a Low Carbon Fuel Standard (LCFS) has not just hampered the prospects of using locally sourced oil but also the heavier crude that comes from ally Canada. In contrast, California’s LCFS has supported the lighter, “cleaner” oil that comes from OPEC. Saudi Arabia, for instance, now supplies 37 percent of California’s oil imports, with Ecuador at 14 percent.

Such a turn to distant international suppliers is actually a quiet environmental problem going ignored. These shipments arrive on crude supertankers, giant ships that not just burn loads of oil themselves but are also at greater risk for spills. Unfortunately, California’s leaders have generally stood against building the pipelines necessary to receive high-quality, lower cost shale oil from other U.S. states.

For its own part, California does have the Monterey shale formation in the central and southern part of the state. The play could hold at least 20 billion barrels of recoverable oil and untold amounts of natural gas. Current Governor Gavin Newsom, however, is not supportive of development like his predecessor Jerry Brown was.

Although there are geological issues in the Monterey that make it a difficult play to exploit, many of those differences could be overcome with capital and by deploying the constantly evolving technology that the U.S. shale industry enjoys. The real problem is that California’s regulatory and tax policies discourage new oil production in the state. Namely, hydraulic fracturing for shale in California is burdened with the same restrictive rules that its offshore industry has. In fact, some municipalities and counties have passed outright bans on fracking, and many oil companies have left the state because drilling permits are too difficult to obtain.

California would be well advised to realize how North Dakota has leveraged shale from its Bakken play into an economic boon (see Figure). One study from the Price School of Public Policy at the University of Southern California, for instance, found that the Monterey could add millions of jobs and tens of billions dollars in tax revenues alone. 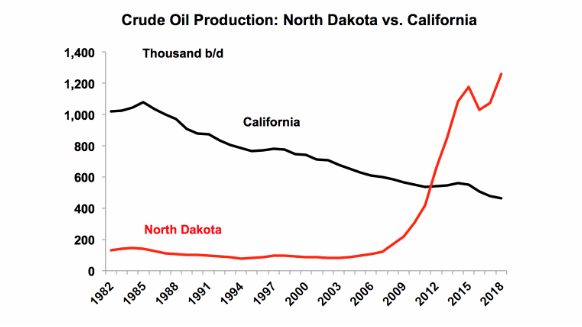 But overall, missing out on the shale revolution for California might be worse on the natural gas side. Gas is still the main source of power in the state, even accounting for over half of generation in recent years. California’s need to import 95 percent of its gas supply is a growing problem because other U.S. states, particularly Western neighbors, are increasingly moving toward more gas to meet rising demand while also lowering greenhouse gas emissions.

Mike  |  April 13, 2019
The state that needs petroleum the most wants it the least. It over-taxes it’s citizens and businesses to the point that both are leaving for more business-friendly areas. Solar and wind power aren’t going to alleviate their power supply problems anytime soon.
Derek  |  April 06, 2019
Until progressive oil and gas companies like EOG, Concho or XTO find interest the technology will sit in the middle part of the U.S. where everything is booming!
Rudolf Huber  |  April 05, 2019
Come on - isn't California the state that tells everybody how great it is and that they don't want the dastardly fossil industry anymore? Its just fine that their own oil and gas dries up. They get what they always wanted. Let them sink into this enough so voters can see how they have been scammed by the crooks in Sacramento. California wants to be green - there is a price for that. Let them pay it. Pain is a great educator.
cenergy  |  April 04, 2019
This collapse is now going to happen in CO , which is now following the same failed energy development policies as in CA.
Neil D. Sharp  |  April 04, 2019
This has nothing to do with fracking. Is the Monterey Shale a tough nut to crack? Yes. Is it impossible? No. This is a direct result of CA politics running the O&G business out of the state. CA has made it so cumbersome to do business in the state that O&G companies don't see the value of doing business in or with the state. There are other states that want O&G investment. See the chart. You reap what you sow.
Bruce Berwager  |  April 04, 2019
I have worked in the California oil and gas industry off and on for 40 years and it is truly appalling at the lack of knowledge that the public has about the industry, regulations, economic benefits, and where their sources of natural gas and motor fuels. As an industry, we continuously try to educate the general public and the liberal Dems that control the state, but most are either irrational demagogues or skeptics of the facts. It is a shame that the Golden State is missing out on such great potential.
Daniel Steward  |  April 04, 2019
“Continued decline” is more accurate than “Collapse” for California’s +100-year old workhorse supergiants: Kern River, Midway-Sunset, South Belridge, Elk Hills, and Wilmington; throw in another 2-3 dozen giant fields; 477,000 BOPD in 2017. The production trend could have been radically different if the upper Miocene Monterey and similar facies across the state’s petroleum basins were dominantly brittle instead of soft. Jobs, tax revenue, and fuel are still important to California despite the deluge of green headlines.
Ed Simonis  |  April 03, 2019
California's oil production problem is mainly failure of fracking to enhance Monterey Shale output. If a solution to that, at reasonable cost, could be found, it would have been already used