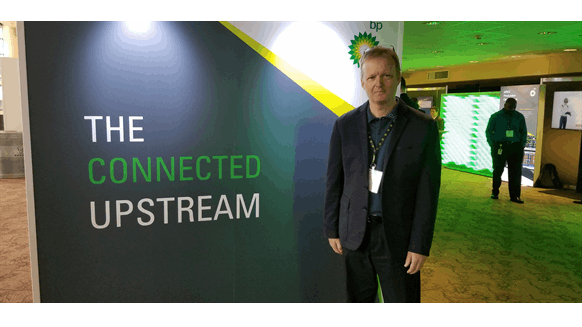 BP's head of digital upstream Rob Kelly says work should be just as enjoyable as being at home.

Rob Kelly, head of upstream digital for BP, had just come from a data science expo at the company’s Houston office before meeting a group of media professionals at the Offshore Technology Conference Tuesday morning.

During the media briefing, BP executives shared their Modernization and Transformation agenda (M+T = Sustainably Improving Performance + Feel) which they began working on almost three years ago.

BP is looking at M&T in three different areas they describe as:

“The people at the expo were just fascinated by what we’re trying to do to pull that digital organization together,” Kelly told Rigzone.

He added, “It’s not about doing it in a single place or project or operation. It’s about ‘can we identify something we can then scale, do it in one region and then scale across the 14 regions we have in the world?’ We’re just scratching the surface with the M&T agenda.”

Kelly said BP is trying to deliver value in three months, in which the technology team approves a concept that his team then takes and delivers MVP (Minimum Viable Product) to an asset or facility.

“For the 18,000 people we have working in the upstream, they’re really looking for ways to make their day-to-day job more fun, more interesting and easier to do. That’s the big positive here,” said Kelly. “It’s trying to make coming to work as enjoyable as being at home.”

Kelly and his team have received feedback about how difficult it is for people to get a hold of the right data to do their jobs.

“It’s in spreadsheets spread all over the place,” he said.

Kelly looks down at his smartphone and scrolls left to right.

“Just like the apps on my phone, which make things so much easier in my home life – you’ve really got to make it as easy as that in the work life. That’s the key,” he said. “I think if we can do that, then we can attract the millennials and the young folks to come in … because that’s what they do, that’s what they like.”

Nikolaos Dedes  |  May 15, 2019
The long run shot is shifting people way of thinking but it is worth to giving it a strong effort
Keith Costello  |  May 11, 2019
I think BP have hit the nail on the head. This is exactly what companies should be doing. The benefits to a company are huge. Apart from the happier workforce, which leads to less time off due to illness, the ability for personnel to switch from one region to another or just from one project to another, and being to drop in to a role seamlessly, makes perfect sense. The article briefly mentions the fact that there is lots of information available to the workforce but it's spread out and hidden away, not easily accessible by everyone. This alone requires streamlining in all large companies. Many people will have their own way of carrying out certain tasks, whether that be recording data, producing KPI's, etc, etc. Some will be better than others but all should be looked at and a system produced which uses the best aspects from all to produce one system that works for all. One area I found difficult when working offshore was accessing onshore based databases looking for information. WiFi offshore, and other remote locations, can be woefully slow. Uploading and downloading large amounts of data is difficult and often impossible. Onshore based staff don't always appreciate this when developing systems but they need to. Having a frustrated offshore workforce is not good bug is often forgotten about.
Sam King  |  May 10, 2019
What utter tripe. Disneyland thinking and disconnected from reality.
Ian Joel  |  May 10, 2019
All these guys that are living in la-la land astound me, what has happened to reality in this world??
James Kennedy  |  May 10, 2019
BP should remove age restrictions and hire experienced people
Dedric Armstrong  |  May 08, 2019
This will be hard to do unless you have the right people with the right peripheral view and understanding of how your projects and operations environments currently work together and how they. I think more attention is needed towards how Information Management can be critical to this goal bp is trying to reach. The IM organization has not been focused on enough and what it can and should encompass. The entire time, the issue is almost 95% a people issue. Lengthy processes and tools come from not having the best people on deck. Too many specialist that are only valuable in their area of expertise. Too many managers that are not aware of where the issues, concerns and attention should really be directed. Mgmt always says a top down approach, but they don't understand or look for the missing piece of the puzzle, which is the minds that fully understand the bottom up approach, Once those two are aligned, then you find the keys to this 'environment' you're trying to reach. Your average specialist does not have the peripheral to grasp where attention needs to be placed or what order to address. I see this at every company I work for. One hand doesn't know enough about what the other is doing. I have said this for years. There is a reason big businesses always say it is the "people, processes and tools" that make business successful. But it has always been the 'people' that cannot seem to fully align the processes and tools. Actually it is the people that have been the roadblock. I could go on and on, but the key word in this, is your people. There is a talent that is just hard to find who has that niche... but maybe you find them. Until then, I just see a continuance of people playing and experimenting with new technologies and implementations within different organizations, entities and groups looking for ways to make day to day work easier. The average person cannot do this, but I'm willing to bet that one person can get it done, this is a FACT.