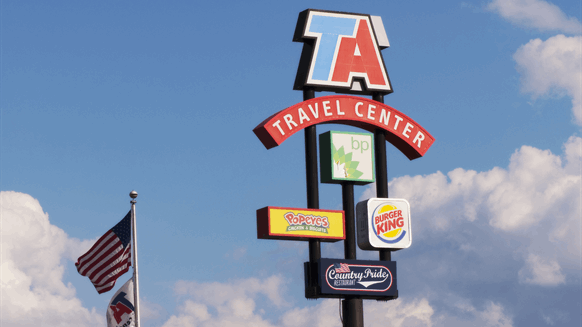 TravelCenters of America Inc. (TA) reported Monday that it has named Jeff Burrell senior vice president for fuel as it pursues a recently announced strategic reorganization and transition plan.

Ohio-based TA, which employs 20,000-plus people and whose travel center network spans more than 265 locations in 44 states and Canada, stated that Burrell will lead the firm’s fuel purchasing and operations – including contracting, retail pricing and exploration and testing of new fuel-related ventures. It added that he replaces Mark Dansizen, who is retiring from the company.

“Jeff’s arrival is yet another deliberate and strategic step we are taking to position our company for growth and success during this time of transformation,” remarked Jon Pertchik, TA’s CEO, in a written statement. “He will challenge the company to test new ways of driving efficiency and value in its high-volume fuel business to help pass savings and efficiencies to our fleets, drivers and leisure travelers.”

Burrell’s appointment marks TA’s fifth high-level management change since the company unveiled a comprehensive reorganization and turnaround plan on May 1.

“This really is a unique time for us; we now have a new senior leadership team in place that we expect to completely shift the trajectory of this great company,” stated Pertchik.