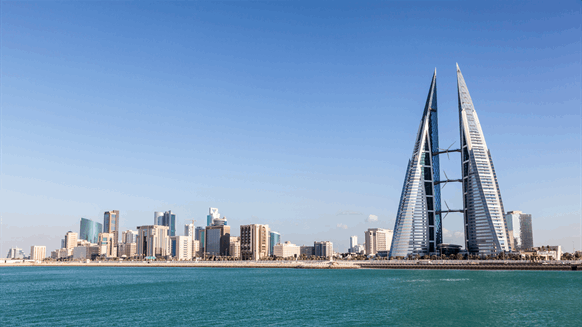 The kingdom, whose capital Manama appears above, is pursuing another oil and gas industry first.

Home to the oil and gas talent base that has successfully developed world-class unconventional resource plays such as the Permian Basin and the Eagle Ford Shale, Texas boasts a formidable storehouse of world-class expertise within its extensive borders.

The smallest country in the Middle East wants to import some of that Texas-sized know-how to develop a massive oil and gas discovery.

In 2018, NOGA announced the kingdom’s largest-ever oil and gas discovery in the shallow waters of the Khalij Al-Bahrain Basin. The ministry, working alongside DeGolyer and MacNaughton, Halliburton and Schlumberger to assess the find, has reported that the discovery could hold at least 80 billion barrels of tight oil in place – on a P50 basis – and deep gas reserves ranging from 10 to 20 trillion cubic feet.

According to a Columbia University Center on Global Energy Policy commentary written by the CEO of consulting firm Qamar Energy, Bahrain would claim a milestone for the oil and gas industry by developing the resource: the first instance of commercial offshore shale oil production. The feat, however, would not mark Bahrain’s first claim to fame in the industry. Standard Oil of California in 1932 made the first Arabian Gulf oil discovery in Bahrain, Al-Khalifa noted.

“This discovery is obviously an opportunity to increase production of oil but also rich gas – like in Texas with the Eagle Ford and Permian and ethane and other natural gas liquids,” Al-Khalifa told Rigzone. “We’re close to some of the region’s largest ethane processing facilities.”

For instance, Al-Khalifa pointed out that Bahrain is close to some of the Middle East’s largest petrochemicals sites – such as Dow Chemical Co. and Saudi Aramco’s Sadara complex in Jubail Industrial City, Saudi Arabia.

Calling unconventional oil and gas production “very much a U.S.-based phenomenon,” Al-Khalifa pointed out that he and other Bahraini officials held earlier meetings with U.S. players last summer. This time around, they are collaborating in talks with operating and service companies as well as entities such as the American Chamber of Commerce (AmCham) and the U.S. Chamber of Commerce.

“We’re trying to learn from the phenomenon that happened here and see if we can attract some of the companies to locate in Bahrain,” said Al-Khalifa, adding that the kingdom has set up a virtual data room and has “invested money” to better explain the quality of the resource to interested parties. “We’re collecting information and trying to set up the right structure for companies to invest. We want them to make money and apply their technologies.”

Al-Khalifa added that Bahrain’s free trade agreement with the United States, coupled with its close proximity to Saudi Arabia and other Gulf Cooperation Council countries, make the kingdom a good launching pad for business opportunities in the region. Moreover, he noted that Bahrain boasts a “very liberal and relaxed environment for foreign companies.”

“It’s an easy place to set up shop” for companies of various sizes, said Al-Khalifa, adding that the kingdom is also looking at the possibility of direct flights to Houston to facilitate trade ties.

The oil minister declined to reveal specifics tied to ongoing analysis of the discovery, but he said that early signs appear positive. A pair of rigs, one operated by Helmerich and Payne and another by Trinidad Drilling, are currently mobilized under a two-year drilling program to evaluate the resource.

“I think it’s a bit too early to throw out (anticipated) production numbers, but I can tell you the quality of the rock is very superior,” Al-Khalifa said. “We’re drilling a few wells to make the data available. It is the source rock (the Ghawar Uplift) that gave you the largest oil field in the world.”

According to a 2018 NOGA written statement, Bahrain officials aim to have the discovery on production within five years.