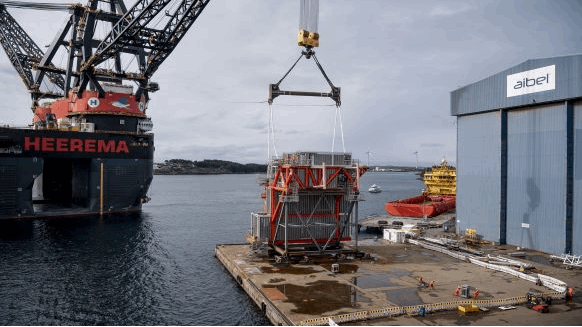 “It was impressive to see how the module suddenly became very small compared to Sleipner,” commented Tone Dalum, Aibel’s SEP project manager. “At the same time, it was very satisfying to complete a well-executed lift and secure another important milestone for the project during this special time. There are many who have worked hard and long to achieve this and who deserve great praise for their efforts.”

According to Aibel, Riser Hang Off module prefabrication started in January 2019 and assembly of the sections began last July. Over the next six months, the company assembled, equipped and completed the module and achieved mechanical completion on Feb. 1 of this year, Aibel added.

The SEP will increase recovery from the Snorre field by nearly 200 million barrels and extend the life of the field past 2040, Equinor states on its website. The firm points out the project comprises a comprehensive subsea development, upgrading Snorre A and increasing gas injection and gas import for injection.

Aibel on Monday stated the module is awaiting an optimal weather window so that it can be transported and installed offshore on the Snorre A platform. The module will connect the risers that will receive oil from the new wells on the Snorre field up to the platform, the company noted. Production at Snorre A is slated to begin in the first quarter of 2021, the firm added.