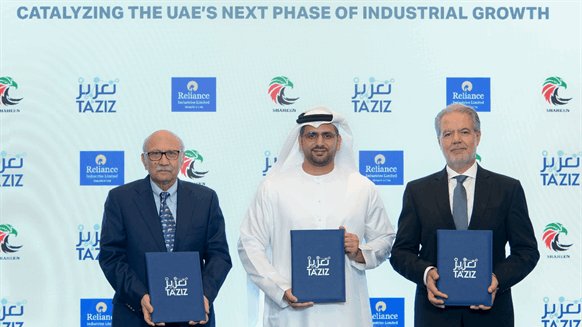 ADNOC and ADQ have launched the next growth phase at the TA'ZIZ Industrial Chemicals Zone.

Abu Dhabi National Oil Company (ADNOC) and ADQ have embarked on the next stage of expansion of the TA’ZIZ Industrial Chemicals Zone, in Al Ruways Industrial City. The expansion would more than double the number of chemicals produced at the hub.

The centerpiece of the expansion will be a new world-scale, low-carbon footprint steam cracker to supply feedstocks for the various downstream production units, bringing multiple new product value chains to the UAE for the first time. The project is in the feasibility study phase, with the design phase set to commence in the first quarter of 2023.

The first phase of TA’ZIZ growth continues to progress, with a new strategic agreement signed at the Abu Dhabi International Petroleum Exhibition and Conference (ADIPEC) to advance the development of world-scale facilities for the production of ethylene dichloride (EDC) and chlor-alkali, polyvinyl chloride (PVC). Site preparation at TA’ZIZ is underway and final investment decisions on the first phase of projects are expected before year end.

In line with the UAE Net Zero by 2050 Strategic Initiative, TA’ZIZ will leverage low carbon electricity sources such as cogeneration from the on-site utility facility, grid power from nuclear and solar clean energy and use best available technology to drive manufacturing growth with lower carbon emissions.

“TA’ZIZ is a critical enabler of the UAE’s industrial development and manufacturing growth ambitions. Following strong demand from partners and investors for the first phase of world-scale growth at TA’ZIZ, and capitalizing on growing global demand for chemicals, we are expediting plans for the next phase of expansion of our chemicals production,” Khaleefa Yousef Al Mheiri, TA’ZIZ Acting Chief Executive Officer, said.

“In line with our chemicals’ growth strategy, this major project supports our wise leadership’s vision to harness our country’s vast natural resources, while responding to the growing global demand for chemicals. By leveraging clean grid power and gas-based feedstocks, we are building new low-carbon industrial value chains that will further grow, diversify and future-proof our economy, as well as create opportunities to support the private sector,” he said.

Fertiglobe, Mitsui & Co. and GS Energy Corporation are also partnering with TA’ZIZ to develop a world-scale low-carbon ammonia facility while TA’ZIZ and Proman are focused on progressing a methanol facility, both at the TA’ZIZ Industrial Chemicals Zone.

Separately, the Zone’s utility facilities, that will provide power, steam, cooling, demineralized and wastewater services will be jointly developed by ADNOC and TAQA.  And, ADNOC L&S and AD Ports Group will develop a liquids terminal and logistics facility with an international partner, VTTI B.V., which will include construction of a new world-class port.

The total investment in the first phase of TA’ZIZ will be in excess of $5 billion (AED18 billion), with most of the chemicals produced in the UAE for the first time. All agreements are subject to regulatory approvals.

Launched at the end of 2020, TA’ZIZ is driving and enabling expansion of the Al Ruways Industrial City, as well as Abu Dhabi’s wider chemicals, manufacturing and industrial sectors.