A First for Panama Canal: Three LNG Tankers Crossed in a Day 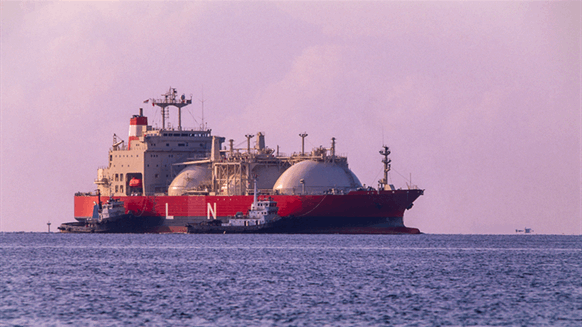 Three LNG tankers sailed through the Panama Canal on the same day this week, marking a first for the newly expanded waterway and highlighting the booming global gas trade.

(Bloomberg) -- Three liquefied natural gas tankers sailed through the Panama Canal on the same day this week, marking a first for the newly expanded waterway and highlighting the booming global gas trade.

All three ships -- Gaslog Hong Kong, Gaslog Gibraltar and Clean Ocean -- entered the canal on a staggered basis from the Pacific side Tuesday and had completed their crossings by early Wednesday, according to vessel tracking data compiled by Bloomberg. A representative for the canal authority confirmed the tanker moves.

The crossings underscore how the LNG trade has surged worldwide as new export facilities from the U.S. to Australia rumble to life and buyers in Asia boost their demand for the fuel. Since the canal completed a $5 billion expansion almost two years ago, traders and terminal developers have been closely watching the authority's ability to accommodate the jump in tanker traffic.

"You're going to have a lot of these plants up an running and you need the logistics to get those cargoes" through the canal, Sam Margolin, lead analyst at Cowen and Company LLC in New York, said by telephone. The increased traffic "should make people feel a lot more confident about the U.S.'s ability to place LNG in China."

As of March, the Panama Canal has seen 134 LNG vessels pass through it this fiscal year, according to a statement. Though this marks the first time three ships made the transit in one day, two ships have made the journey in 24 hours more than a dozen times.

"As demand from the LNG segment continues to grow," the canal is "taking the necessary steps to increase capacity commensurate with demand," it said in the statement.

To contact the reporters on this story: Ryan Collins in Houston at rcollins74@bloomberg.net, Naureen S. Malik in New York at nmalik28@bloomberg.net.

To contact the editors responsible for this story: Reg Gale at rgale5@bloomberg.net, Joe Carroll