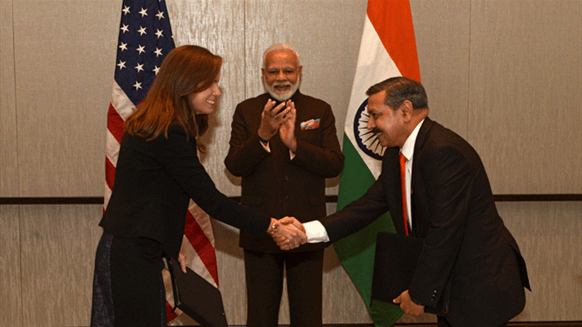 Tellurian Inc. reported in February of this year that Petronet LNG Limited INDIA (PLL) might invest in its proposed Driftwood LNG liquefaction and export facility near Lake Charles, La.

During a ceremony in Houston Saturday witnessed by Indian Prime Minister Narendra Modi, officials with both companies signed a memorandum of understanding (MOU) to advance Petronet’s equity investment plan.

The MOU will enable Petronet and its affiliates to negotiate the purchase of up to 5 million tonnes per annum (mtpa) of LNG from Driftwood concurrent with its equity investment in Driftwood, Tellurian noted in a written statement over the weekend.

In a separate statement Sunday to the Bombay Stock Exchange and the National Stock Exchange of India, Petronet executive Rajan Kapur pointed out the investment process facilitated by the non-binding MOU is subject to due diligence and Petronet board approval.

As Bloomberg reported last year, Tellurian is funding Driftwood in an unorthodox manner. The company minimizes its debt by seeking upfront payments from investors who would own the project and obtain LNG at cost, the news agency explained.

“Increasing natural gas use will enable India to fuel its impressive economic growth to achieve Prime Minister Modi’s goal of a $5 trillion economy while contributing to a cleaner environment,” stated Gentle. “At Tellurian, we look forward to a long and prosperous partnership with Petronet net in the Driftwood project.”

Tellurian also noted that it seeks to finalize the transaction agreements with Petronet by March 31, 2020. The Driftwood LNG website states the facility is targeted to begin operations in 2023.

Kathy  |  September 24, 2019
Excellent news for all of us who live in Louisiana!
RELATED COMPANIES
Company: Petronet LNG Ltd. more info