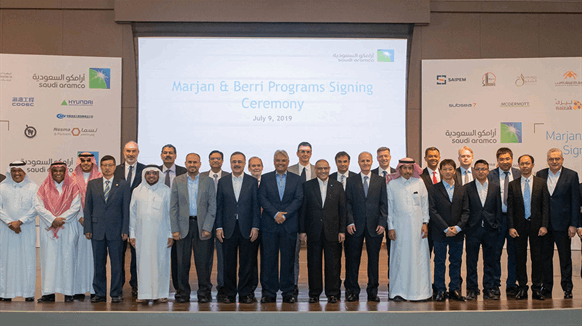 Under the engineering, procurement, construction and installation (EPCI) projects, Saipem’s Onshore E&C division will develop the land facilities tied to Saudi Aramco’s Berri and Marjan gas fields in the Arabian Gulf. According to Saipem, its contracts entail:

“The awarding of these new complex contracts testifies to the evolution of our historic relationship with Saudi Aramco and confirms the strategic positioning of Saipem in the Middle East,” Saipem CEO Stefano Cao said in a written statement emailed to Rigzone. “In the tough context of recent years, Saipem has demonstrated a constant commitment to sustainable economic growth through technological innovation.”

The two Saipem contracts are among 34 contracts Saudi Aramco has awarded tied to the engineering, procurement and construction of its Marjan and Berri developments. The national oil company (NOC) reported Tuesday that it plans to raise production capacity at the fields by 550,000 barrels per day (bpd) of Arabian crude oil and 2.5 billion standard cubic feet per day of gas. It stated that elements of the Marjan integrated development project include:

The NOC stated the Berri development project, which will raise output from the offshore field by 250,000 bpd, will include:

Saudi Aramco stated that more than 90 companies and institutions were invited to bid on the Marjan and Berri contracts, valued at $18 billion. Sixteen Saudi and international firms ultimately won the engineering, supply and construction contracts, with Saudi firms claiming 50 percent of the awards, the NOC added. Also, Saudi Aramco is requiring contractors to maximize procurement of material and equipment from local suppliers and manufacturers.